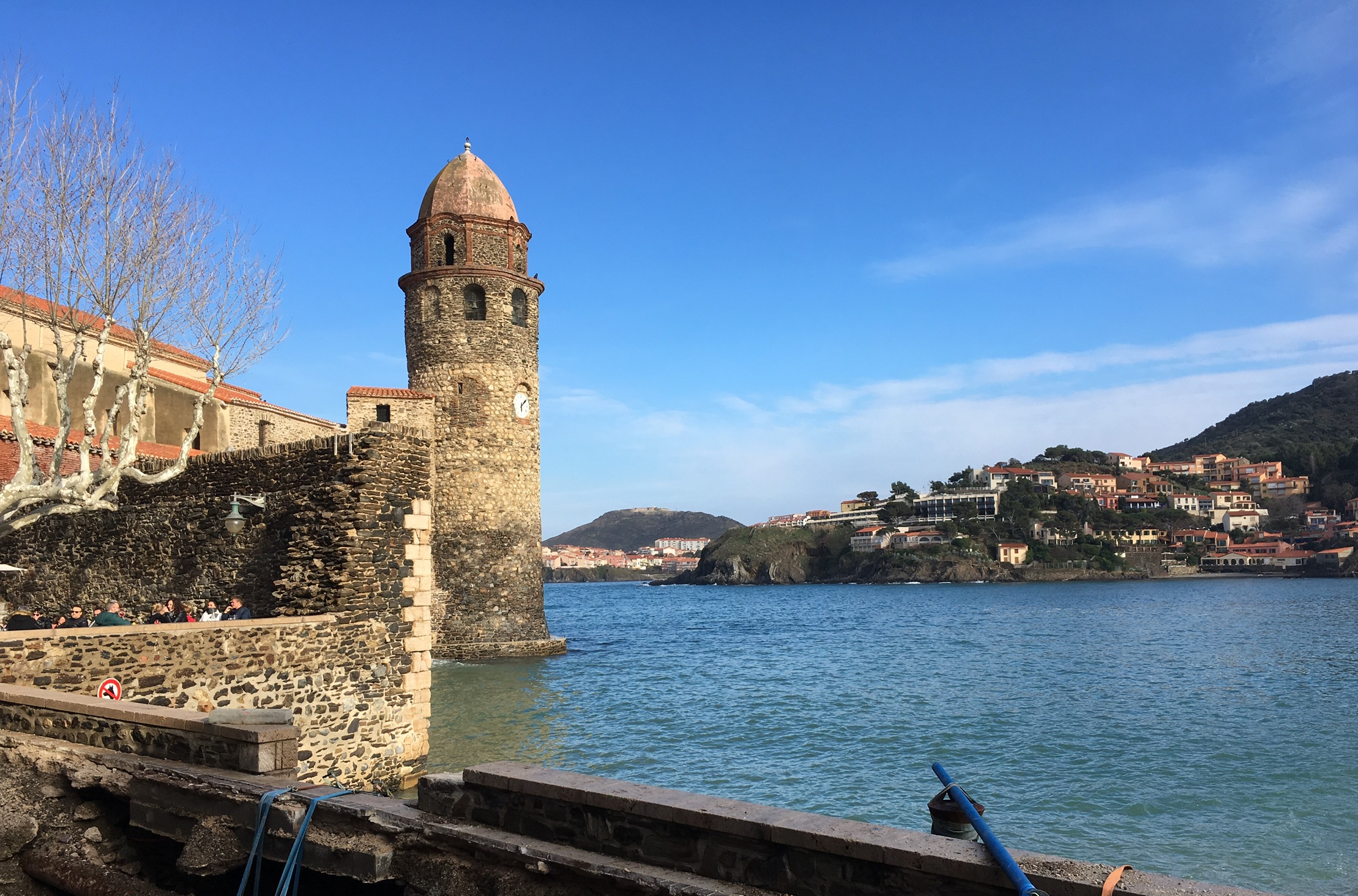 The South of France with Dr. T

Sunday 12 May, Fly from the USA

Arrival: If by train, exit the station and while facing the street, look to your right. You should see the hotel on the corner across the street. If by plane, take a taxi into town and the Hotel Oceana Le Metropole.

Monday 13 May, the tour starts in Montpellier (2 nights)

In an attempt to keep you from going to bed and then waking up at 2:00 a.m., gather at 5:00 p.m. for Welcome meeting and Walking tour of Montpellier city center by Dr. T. including the Place de la Comédie, the Esplanade walk, and the pedestrian streets of the Old Town. Montpellier (metropolitan area population: 560,000) developed rapidly in the Middle Ages as a large trading city, sitting astride the route from Italy to Spain, and close to the Mediterranean (just 10 miles away). Occupied by Arabs for three decades in the 8th century, in the 13th and 14th centuries it was part of the Kingdom of Aragon. Its links to the east gave it a head-start as a center for medicine – by 1200 it was one of the top medical centers in Western Europe, alongside Bologna. In the 1960s it benefitted from its climate, good transport connections, and research background when companies like IBM and Honeywell were choosing sites to expand in Europe. Montpellier has doubled in population since 1970. The walk will conclude with dinner at 7:00 at Tchou-Tchou. Overnight in Hotel Oceana Le Métropole, Montpellier.

8.45 a.m. departure (meet in the lobby – short walk to our coach pick-up point). Drive 1 hour 30 minutes north to the Millau Viaduct – a beautiful bridge spanning an entire valley, designed by Sir Norman Foster (who also designed the glass dome atop the Berlin Reichstag). We’ll go first to the viewpoint, have coffee, then go to a spot at the base of the tallest of the bridge supports – the world’s tallest, at 270 meters they are nearly the height of the Eiffel Tower. Free time for lunch in Roquefort village, in the heart of the limestone Causse country. Tour of one of the Roquefort cheese factories (Papillon) – gather at 1.50 p.m. Leave (approx. 3.00 / 3.15) for 1-hour 40-minute drive back to Montpellier. Dinner at 7:30, overnight in Hotel Oceana Le Métropole, Montpellier.

8.45 a.m. departure (meet in lobby). 1-hour drive west to see part of the Canal du Midi – a 17th-century public works program to join the Mediterranean to the Atlantic: coffee by the  Ecluses de Fonséranes, an impressive set of nine adjacent locks. On 30 minutes to the old Roman regional capital of  Narbonne: short walking tour including the exposed Roman road visible below the main city square – you can walk on it! – and the setting of the unique cathedral with a stunning Gothic apse and choir. It is beautiful, but that is all there is – to build the Nave in the same style would have involved pulling down the adjacent city wall: in the Wars of Religion, they still needed the wall, so the cathedral project was stopped… for good! Break for snack lunch here. 3.00 p.m. departure – drive 1 hour 30 minutes south to  Collioure, a pretty pleasure port on the Mediterranean where the flat coastline has given way to the very first foothills of the Pyrénées. We are now in Roussillon – at times part of Spain until 1659. Dinner in a nearby restaurant, La Frégate, overnight in La Casa Païral in Collioure.

Thursday 16 May, Pyrénées: the fortress town of Villefranche-sur-Conflent

9.00 a.m. departure. 1 hour 30 minute drive up into the Pyrénées for a guided visit to the impressive fortress town of Villefranche. Fortified by the French engineer Vauban in the late 1600s to defend the new French border; great mountain setting. At 11.15 a.m. we have a visit in 4X4 vehicles right up the hill to another fort overlooking the town, with (weather permitting) great views of the Pic de Canigou mountaintop. Time for lunch (plenty of choices) before heading back to Collioure at 4.00 p.m. Dinner in a nearby restaurant, La Can Pla, overnight in La Casa Païral in Collioure.

Friday 17 May, Elne & Ceret; the Mediterranean at Collioure

9.00 a.m. departure. A short tour of the region in the morning: 40-minute drive west to the bustling small town of Céret, the center of the fruit-growing region. Coffee, time for the Museum of Modern Art (designed to let in the Mediterranean light; Chagall special exhibition) – or the Museum of Musical Instruments. (Choose one and I will pay for your entrance.) 12.00 sharp, departure – 30 minutes to Elne for lunch at the Cara Sol restaurant (with wonderful views of Mt Canigou, weather permitting). Time after for the famous sculpted cloisters at Elne (12th to 14th centuries) 3.00 p.m. departure – just 20 minutes back to Collioure. Rest of the afternoon is free to enjoy Collioure: follow the walking trail celebrating views painted by Matisse & Dérain, walk the paths in the old district of Mouré, go inside the Eglise Notre-Dame-des-Anges whose tower doubled up as the lighthouse for the old port. Dinner on your own. Overnight in La Casa Païral in Collioure.

8.30 a.m. departure (NB early departure). Drive just under 2 hours north to the market town of  Pezenas in the Hérault county of Languedoc – famous for its huge Saturday market. Time to enjoy the market, the superb 17th-century architecture, and find some lunch.  2.15 p.m. departure for 40 minute drive north to the pretty village of  St Guilhem le Désert, tucked away in the gorges of the Hérault River – short guided walk in the narrow streets, including the Romanesque abbey and its cloisters: half of the cloisters were sold off in the early 20th century – they ended up forming the major part of The Cloisters in upper Manhattan! 5.00 p.m. departure for a drive from here over the hills (close to DrT’s holiday home) south to  Sète – a busy Mediterranean fishing & trade port – arriving at our hotel by 6.30 p.m. Check out the rooftop bar (weather permitting)! Gather in the hotel lobby at  7.40 p.m. to walk to dinner at a restaurant close to the hotel, Le Petit Bistrot (opens 8 p.m.) – short walk via seafront. Overnight in the Hotel Imperial in La Corniche part of the town, 400 yards from the sea.

9.00 a.m. departure. Drive 1 hour east to the 13th-century walled town of  Aigues-Mortes, a ‘new town’ built to give France access to the Mediterranean. It is on the edge of the Camargue (the Rhone Delta), famous for its pink flamingoes. Walk on the walls and/or climb the Tour de Constance; time for you to have lunch in/near the Place St Louis, and take a look inside the Church from which King Louis IX set off on the Crusades. 1.30 p.m. departure – back to  Sète for some free time: take a boat ride, enjoy cafés along the harbor front, Musée de la Mer (or straight back to the hotel at this point). Coach returns at  4.15 p.m. to return you to the hotel. At  7.00 p.m. the coach takes us into the town center for dinner at La Palangrotte; overnight in the Hotel Imperial.

9.00 a.m. departure. 1-hour 30-minute drive to the Pont du Gard, the largest surviving Roman aqueduct in the world. While Dr. T gets our tickets, we will take a bit of a coffee/potty break. Dr. T will then guide us around the site with a possibility that the more adventurous can follow him up the slopes for a great photo op. Be sure to allow plenty of time for the museum. Grab a snack lunch before leaving the aqueduct. 1.30 p.m. departure for Marseille (across the border from Languedoc/Occitanie into Provence). After checking into our hotel, dropping off our bags, and having a refreshing drink, our coach will leave at 4.30 p.m. to take us along to the new (2013) MuCEM – the Museum of European Cultures of the Mediterranean. After our visit, we will stroll along the harbor front back to our hotel. Dinner (7:30) at nearby at La Brasserie du Port, overnight in Hôtel La Résidence.

9.00 a.m. departure – by taxis to St Victor Abbey to start a morning’s guided city walk by Dr. T. Stroll back along the harborfront – after coffee we’ll take in the Museum of the History of Marseille which includes the ruins of the Greek port. Free afternoon to enjoy Marseille. Dinner at the Restaurant La Relais 50 in the hotel, overnight in the Hôtel La Résidence.

Wednesday 22 May, tour ends – fly/train out of Marseille

The tour ends with breakfast at the hotel. Choose to fly home or extend to Paris, Barcelona or elsewhere at own expense. Of course, you can take a taxi from the hotel, but there is a Metro station a short walk from the hotel, and the train station is the second stop from that station. From there, you can then take the train to Paris or Barcelona, or take the airport shuttle to the Marseille Airport (MRS).