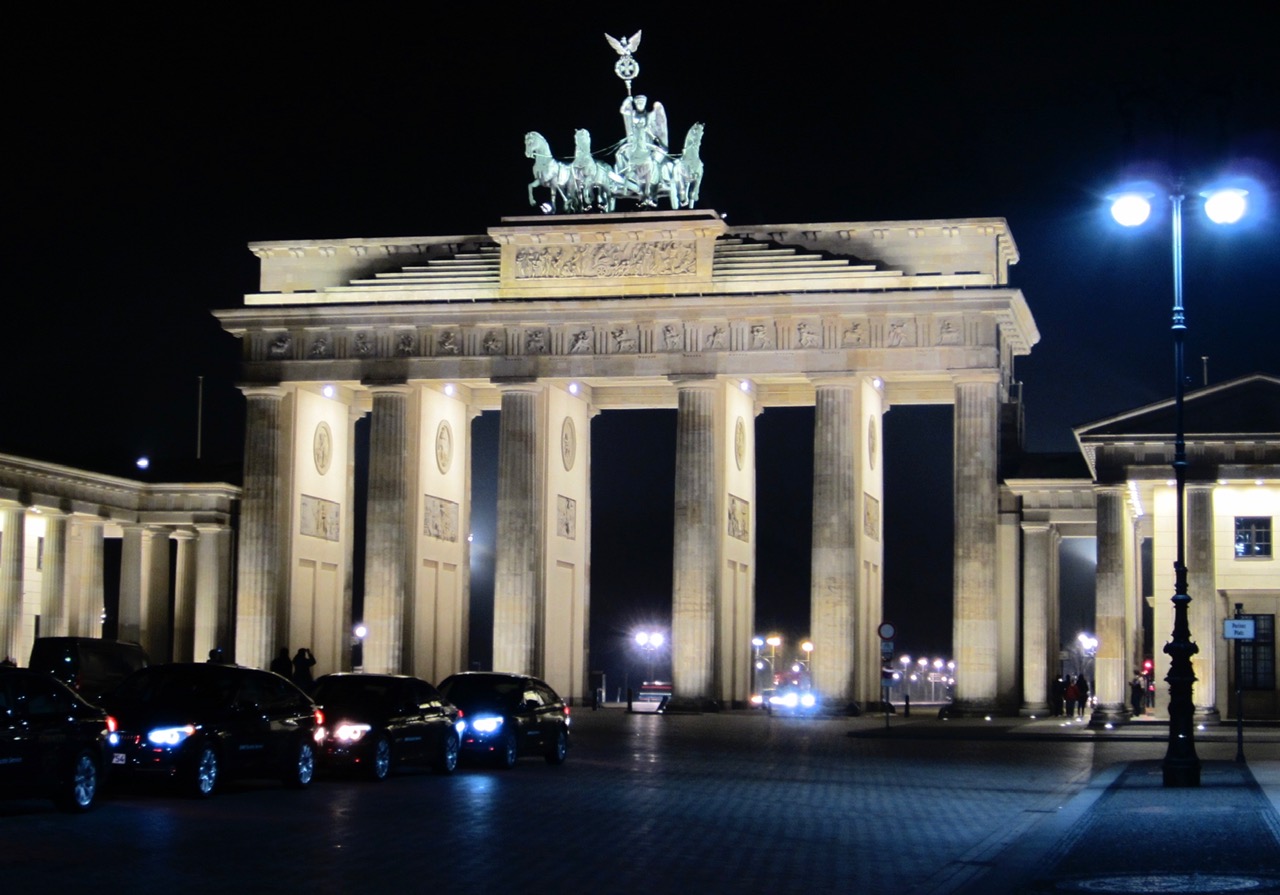 The Brandenburg Gate in Berlin

Here is the itinerary for the 2021 tour. Naturally we will probably need to make some adjustments. But the dates will essentially stay the same.

Early Birds arrive at Paris CDG airport. Since we will be arriving at different times, you will need to make your own arrangements to get into Paris. The simplest and least expensive way is to use the RER. Buy a ticket for 9.50 euro at the airport (the machines take credit cards) and take the RER B to the Chatalet-les-Halles station. Once arrived at Chatelet-les-Halles, follow signs for Exit  Rue de Rivoli. There, you should see signs for N° 12 Rue Bertin Poirée which is the  nearest one to the hotel.  You might find it useful to print the map found on the hotel web page. The rest of the day is free, and dinner is on your own. Overnight in the Grand Hotel Dechampaigne,

Transfer in from CDG (see directions above.) Dinner will be at a nearby restaurant, time and place to be determined. Overnight in the Grand Hotel Dechampaigne,

Day free to recover from the flight and explore this great city. Dinner at a nearby restaurant, time and place to be determined. Overnight in the Grand Hotel Dechampaigne.

9.00 departure for all-day tour of the US sector: Omaha Beach (the beach itself, then the American Military Cemetery on the bluffs above), Pointe du Hoc where the Rangers scaled the cliffs, the airborne actions around Sainte Mere Eglise, and Utah Beach. Walk to evening meal in Bayeux.

8.30 check-out and departure. To the Commonwealth Cemetery in Bayeux, then a choice of the Bayeux Tapestry and coffee in Bayeux – or the Battle of Normandy Museum. Depart from Tapestry car park at 11.00 (from museum at 10.45) for 3 hour 30 minute drive to Paris Gare du Nord + lunch snack stop on the freeway. Gare du Nord by around 3.00 p.m. for 3.55 p.m. Thalys high-speed train to Aachen, Germany (290 miles): 2 hr 40 minute ride, arriving 6.35 p.m. Our hotel is just 200 yards (or a very short cab ride) from the train station. Evening meal in pub opposite. Hotel Am Marschietor

Monday 19 September:  Tour bus through ‘Battle of the Bulge’ sites to Bastogne (2 nights)

9.00 departure for 1 hour drive to Monschau – a pretty German town in the Eiffel region for our coffee stop. Then a 75-mile tour from part of the start-line of the 16 December 1944 German attack into the Ardennes region – the ‘Battle of the Bulge’ – all the way to Bastogne, where US forces were surrounded at Christmas 1944. Check in here for 2 nights to hotel in quiet street just 100 yards from the main square. Evening meal in main square. Hotel Melba

9.00 departure for morning tour of the Bastogne battle sites: the village of Noville, the German cemetery, the Bois Jacques woods where regiments of the 101st Airborne Division were dug-in (with a possibility to see some surviving fox-holes), the ‘Band of Brothers’ Memorial, and the American Memorial at Mardasson. Group lunch in nearby town of Houffalize, where there is a German Panther tank on display.
Back to Bastogne for free afternoon – relax, stroll the main street, walk to see the donkey farm, or take in the 101st Airborne Museum which is just 100 yards from the hotel. Free evening.

8.30 departure for 2 hour 30 minute drive tacross into the Netherlands to the ‘Market-Garden’ battlefield spread between Eindhoven and Arnhem. This crucial September 1944 battle, involving one British and two US airborne operations, plus a British ground force attacking to join the three landing areas together, ended in stalemate when the British lost the bridge they had taken on the first day at Arnhem (hence the movie title “A Bridge Too Far”,1978). Our tour takes in 101st Airborne landing zones at Son, the 82nd Airborne’s story (with excellent local museum in tribute to the American actions), the taking of the bridge at Nijmegen and finishing with the Bridge at Arnhem. Check in to hotel just 400 yards from the Bridge in Arnhem for 2 nights. Walk to evening meal nearby. Holiday Inn Express

9.00 departure for 20 minute drive west to visit the British drop zones, explore the routes they took into Arnhem, then the massive street fighting they got into around the St Elizabeth Hospital. Visit the Commonwealth cemetery in the suburb of Oosterbeek, followed by a group lunch. Time in the excellent Airborne Museum in Oosterbeek before heading back to the hotel around 4 p.m. Free evening.

9.00 departure for a one hour drive across the border to Wesel, Germany, to see part of the site of the Rhine Crossings operation of 23rd March 1945. A joint US-UK operation involving paratroopers and boat-borne infantry, this was the largest of the various Rhine Crossings. (It had been preceded by the American surprise seizing of a bridge at Remagen, south of Cologne, on 7th March – too far south for us to include on our itinerary; the Remagen bridge itself collapsed later in 1945 and was not rebuilt).

Drive one hour to Essen in the Ruhr industrial region. Here we will be dropped off for free time for lunch. Then we leave our tour bus and take the ICE train to Berlin – a 330 mile journey, taking 3 hrs 40 minutes. The train leaves Essen 2.23 p.m., arriving Berlin 6.09 p.m. Check-in to our hotel (for 3 nights) just a short cab ride (or two tram stops) from Berlin main train station. Evening meal at Bonfini, an  Italian restaurant nearby.Hotel i-31

9.00 departure: short walk to see the nearby remains of the Berlin Wall in Bernauerstrasse. Then by S-bahn four stops to Potsdammerplatz: a walk through the historic heart of WWII Berlin taking in the Luftwaffe HQ, the ruins of the Gestapo complex, the site of Hitler’s Chancellery, the Memorial to the Murdered Jews of Europe, the Brandenburg Gate and the Reichstag.

After a snack lunch we meet our Berlin tour bus for a drive out to the eastern part of the city to see the Soviet memorial at Treptower Park and the German-Russian Museum in Karlshorst – this includes the room where the senior Nazi command surrendered on 8 May 1945. Back to hotel. Evening meal in the Gendarmenmarkt area (3 stops by U-Bahn).

9.00 departure for 1-hour drive to Potsdam to visit the Cecilienhof Palace, site of the July/August 1945 Potsdam Conference. Afterwards, across town for coffee and a walk in the grounds of the 18th-century palaces of Frederick the Great – then snack lunch in Potsdam’s Dutch Quarter.
Drive back to central Berlin – short walk around the heart of contemporary Berlin: Bebelplatz to see the memorial to the 1933 burning of books, Unter Den Linden for the war memorial and the rebuilt Royal Palace, and an introduction to the impressive museums complex on Museums Island. We finish with an hour in the Museum of German History to see how modern Germany presents the story of World War II. Bus back to hotel – or stay on to visit one of the other museums (& make your own way back). By tour bus for final evening meal in the Prenzlauerberg district.

Monday 26 September: Return to USA or continue on to Venice for the Italy tour

Below are the participants on the 2021 tour. If you know any of them, give them a call and ask them what they thought of the tour.